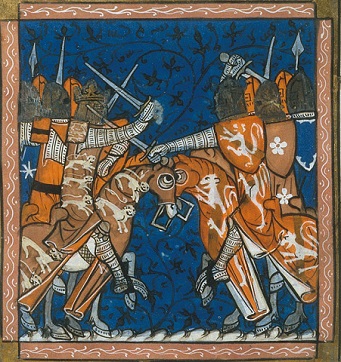 The Romans, Just Wars, and Exceptionalism

About the Author: Dr. Shadi Bartsch-Zimmer is the Helen A. Regenstein Distinguished Service Professor of Classics and the Program in Gender Studies and the Director of The Stevanovich Institute on the Formation of Knowledge. Her research interests are in Neronian literature, Seneca the Younger, History of Classical Rhetoric, the Ancient Novel, and the Classics in Modern China. Learn more about her here.

American citizens concerned about our military policy abroad might find an interesting mirror in ancient Rome.  The Romans wanted to make sure that they were fighting wars that were not driven by greed for gain, but were just.  In fact they managed to make such claims for every single war of expansion they fought, and when they won, it confirmed their belief that they were in the right:  after all, if the gods hadn’t supported them, they would have lost.  But how were the Romans so sure that their wars were just before they saw divine support via victory?

Part of the answer sounds strange to us; the other half, perhaps, does not.  First, the Romans observed specific religious rituals to ensure divine favor, such as looking for omens in the entrails of sacrificed animals before declaring war.  Through these omens they would know if the gods supported their proposed course of action.  And if they had to account for a defeat, there were often explanations that the unfavorable omens had been ignored.  For example, when the Romans lost the naval battle of Drepana in 249 BC it was clear why they had lost, at least in retrospect.  It seems that when the admiral Publius Claudius Pulcher asked whether the sacred chickens on board the ship were eating their grain (even chicken antics could be an indicator of divine favor), he learned that on that particular morning they had refused their breakfast, a very bad sign. After trying to coax them into a few nibbles, Pulcher lost his temper and threw them into the sea, shouting “If they don't want to eat, then let them drink.” The Romans lost that naval battle, and Pulcher was tried for incompetence and impiety and fined a large sum by the court.

But the Romans were pretty sure they were the good guys even without these rituals telling them when to go to war.  It helped that they believed their civilization and their political system were better than those of the peoples they invaded, and that they were doing these subject nations a favor.  As the historian Livy wrote, “There was one nation in the world which would fight for the liberties of others at its own cost, with its own labor, and at its own danger.  It was even ready to cross the sea to make sure there was no unjust rule anywhere and that everywhere justice, right, and law would prevail.”  In his Republic, Cicero claims that the Romans got their empire almost by accident through helping out their allies.  “Our people, through repeatedly defending their allies, have ended up as master of the world.”  And in the Aeneid, the national epic of Rome’s rise written in the first century BC, it is made clear that Rome’s military expansion is actually its divine destiny:  The god Jupiter proclaims, “On the Romans I impose no boundaries of time or place:  I have granted them empire without end.”  The epic hero Anchises says as much to his son. “You, Roman, remember to rule the nations with power --this will be your skill.  Impose the custom of peace, spare the vanquished and defeat the proud.”

Roman just war theory, such as it was, had corollaries and implications beyond war itself. It fit into a matrix of Roman cultural and national beliefs that brought together religion, pride in the Roman expansion, and a firm sense of the moral character of their ancestors, all of this creating a sense that the Romans were special.   Perhaps not curiously, their national epic, the Aeneid, eventually appealed to another group besides the Romans, another band of settlers who had to cross the sea, found a new nation, and build up their territory from a narrow coastline to an entire continent.  As Susan Ford Wiltshire has noted, “because the defining direction of America has always been westward, in terms of both original colonization and internal expansion,” the epic’s depiction of a people traveling west as as explorers and colonizers spoke to early Americans especially.  Uniting the territory of America in one landmass was the geographical expression of the idea of an American manifest destiny as it was popularized in the United States in the mid-19th century:  to conquer others as part of a divine plan and to export what was religiously and politically right.

The term “manifest destiny” was first used in 1845 by the journalist John L. O’Sullivan, who wrote that the US had “a manifest destiny to overspread and to possess the whole of the continent which Providence has given us for the development of the great experiment of liberty and federated self-government entrusted to us.” This notion that the young nation of America had a divine mandate to push west across the continent was used in the 1840s to justify the war with Mexico, it was used to acquire part of Oregon from the British Empire, it was used to explain the need for expansion past the Louisiana Territory.  It is even visible on the $1 bill.  On one side there is picture of the Great Seal of the United States, designed by a Latin teacher, Charles Thomson, who explained that "The Eye over it the pyramid and the motto Annuit Cœptis allude to the many signal interpositions of providence in favor of the American cause."  As for the Latin phrase on the seal, “annuit cœptis,” which means, “God has favored our endeavors,” it comes from a battle scene in the same Roman epic, the Aeneid.  The future king Ascanius asks Jupiter for his help in fighting the war against the native Italians so they can found a nation in Italy.  “Favor my endeavors, Jupiter,” he asks, and then shoots an arrow at the native enemy, piercing him through the head and killing him instantly.

But we should be clear that manifest destiny was not just a cynical excuse for territorial land grabs, or sea or sea.  It was also an expression of almost religious faith in the uniqueness and moral value of the American democratic experiment.  Because nations and peoples need to believe they are just, or at least that their actions ultimately protect something of great value, even transcendent value, they create national stories in which they act for the most part on the side of right.  This is the case whether they are acting in the interests of their own manifest destiny or in the interests of the people whom they are making into subjects and colonists.  In the course of time, manifest destiny came to suggest that the United States had a national virtue that was a result of its experiment in freedom and democracy. By the time of Woodrow Wilson, who actually used the phrase in a presidential address, it was an expression of the responsibility of the United States to protect and promote democracy as a form of government throughout the world.  The idea became part of our history and part of our purpose.

Both the Americans and the Romans believed in the excellence of their form of government.  Both also seem to have had some degree of belief in the religious sanctity of their nation and their foreign policies, and thought it their duty to export these benefits to other countries.  Like the Romans, we are tied together by a largely shared politico-religious heritage upon which we have grounded the nature of our ethos as a nation and the nature of our moral uprighteousness.  Unlike them, we don’t use sacred chickens.  But we should realize that while national myths such as exceptionalism are valuable in many ways, not least in providing people with a sense of identity and pride in their country, such myths, in a globalized world, can stop us from hearing other people’s myths, or listening to their identities.