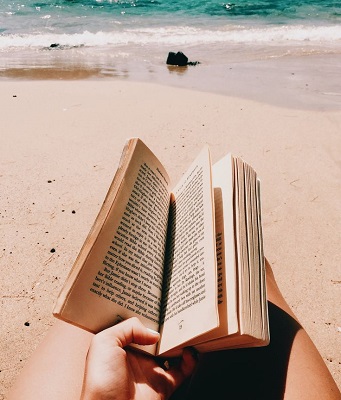 From quantum physics to Japanese history, psychology of death, colonialism and environment, urban planning, science fiction, and the commodity of enslaved 16th century African women, IFK's Summer Reading list has something for all intellectual curiousities. Recommendations from IFK Faculty and students.

Something Deeply Hidden: Quantum Worlds and the Emergence of Spacetime By Sean Carroll

"This is an incisive, accessible introduction to how we know about the fundamental nature of reality and why Hugh Everett's "many-worlds" theory is so compelling."

"As rovers continue to make news on Mars, Princeton sociologist of science Janet Vertesi offers an embedded study of the NASA engineers and scientists controlling these distant robotic explorers. Her comparative ethnography of two planetary missions reveals how different organizational structures and team cultures back on Earth shapes the knowledge these machines end up producing about the cosmos."

Pollution Is Colonialism by Max Liboiron

“Max Liboiron presents a framework for understanding scientific research methods as practices that can align with or against colonialism.”

The Blizzard Party by Jack Livings; Klara and the Sun by Kazuo Ishiguro; The Great Believers by Rebecca Makkai

Recommended by Adam Cifu, IFK Faculty and Professor of Medicine

Genetic Crossroads: The Middle East and the Science of Human Heredity By Elise K. Burton

“I look forward to reading my friend's book, which just came out. In fact, I ordered it for the UChicago library and the e-book is now available for everyone!”

The Laws of Chaos: A Probabilistic Approach to Political Economy by Emmanuel Farjoun and Moshé Machover

“An attempt to develop a scientific, non-determinist theory of political economy.”

The Raven Tower by Anne Leckie

“I'm finally getting around to reading Anne Leckie (who I love!)'s standalone novel, The Raven Tower. Could be a fun contrast to Terry Pratchett's Small Gods.”

I May Be Some Time: Ice and the English Imagination by Francis Spufford

“During the warm summer months, I will be reading I May Be Some Time: Ice and the English Imagination by Francis Spufford, a study of how the Arctic captured the English imagination in the nineteenth century, with its vast expanses forming a great white blank that poets, explorers, and natural philosophers filled in with their speculations, their imaginings, and their attempts to known a vast unknown.”

The 99% Invisible City by Roman Mars and Kurt Kohlstedt

“Encyclopedia format and covers all the surprising reasons behind small urban artifacts most people never stop to take notice of.”

"[The book] explores caveats in human judgment, and how to improve it."

The Denial of Death by Ernest Becker

“I plan to read again this summer. It might be a somber read for some people, but I'm really interested in psychoanalytic theories and love the comprehensive approach he took at explaining our deepest fear — the fear of mortality.”

Showa 1926-1939: A History of Japan by Shigeru Mizuki; Ôoku: The Inner Chambers by Fumi Yoshinaga

“Both series expect a reader with some familiarity with manga, but not too much, and both are very mature, intelligent works, nothing like the kids' action series which most people who are less familiar with manga think of first.”

“Overcoming a paucity of historical sources with a combination of encyclopedic knowledge and imagination, this beautiful and original book presents American history from the perspective of the black women and girls whose voices are so often erased.”

Reckoning With Slavery: Gender, Kinship, and Capitalism in the Early Black Atlantic by Jennifer Morgan

Art Cinema And India's Forgotten Futures: Film And History in the PostColony

Empire of Eloquence: The Classical Rhetorical Tradition in Colonial Latin America and the Iberian World

Written by Gene Wolfe with a new entry by Ada Palmer, IFK Faculty and Associate Professor of Early Modern European History and the College

and if you're really into it, listen here to John Miller discuss The Book of the New Sun with Ada Palmer on National Review's Great Books podcast.