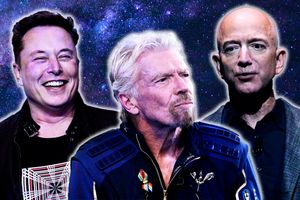 With millions watching the meticulously stage-managed suborbital spaceflights by Virgin Galactic and Blue Origin, it’s tempting to conjure the image of a new space race between rival companies and their billionaire owners. But we are far from the tense days of the Cold War when superpowers competed in space to showcase technical capability and military might. What we are seeing instead is a historic transformation of the aerospace landscape, away from large, national agencies animated by militarism, exploration, and science toward smaller, private companies selling a spaceflight experience—and long-term visions of off-world settlements.

Occurring a mere nine days apart, these flights with their famous passengers have created a breathless spectacle. The spotlight is on flashy personalities and saccharine space-themed pageantry, rather than sober assessments of what the future could hold. A quick scroll through space Twitter shows the flights have polarized public opinion. Critics belittle out-of-touch elites for vaingloriously crafting their public personas while diverting attention away from their problematic wealth and the climate impacts of their business empires. Supporters trumpet the flights as a giant leap toward what they see as our inevitable utopian destiny in space.

Neither has it quite right. The perspective of history shows that these space companies do represent something new and important: a reconfiguration of who and what space is for. Rather than one cosmic destiny we face multiple pathways forward. We have choices about our future in space. Now is the time for all of us to consider the long game—what is changing, what it means, and what could happen next—rather than quibble about who really earned their astronaut wings.

A major indicator that a sea change in space is underway is that billionaire owners are opting to personally fly on their own systems, and early in the process. Richard Branson rode Virgin Galactic’s VSS Unity rocket-plane on its first test flight with a full passenger section. Jeff Bezos is on the manifest for his New Shepard capsule’s very first crewed launch. Sixty years earlier, when the capsule’s namesake astronaut, Alan Shepard, made a suborbital flight to become the first American in space in May 1961, NASA Administrator James Webb was more than happy to watch the risky ordeal from the safety of Earth. Webb never used his power to join a space crew, and in that moment the idea would have seemed ridiculous. Not so today. Now space is a place the powerful badly want to visit themselves for the experience, and to claim a bit of the heroic aura and mystique we’ve attached to previous spacefarers.

At the dawn of the Space Age in the 1950s, leaders viewed space through a Cold War lens as a strategic place for military operations. Shepard and other early NASA astronauts were military test-pilots with college degrees in engineering. Committees of government experts made careful selections of America’s astronauts. After the triumph of Apollo 11’s lunar landing in July 1969, the military character of space gradually took a backseat to science. Think of the rovers exploring Mars or advanced-degree-holding scientist astronauts conducting research on the International Space Station—space as a place for science is still the dominant paradigm.

But now Virgin Galactic, Blue Origin, and Elon Musk’s SpaceX are adding another type of elite person to the lineage of the astronaut: not soldiers or scientists but wealthy passengers seeking the thrill of weightlessness and a glimpse of the curvature of the Earth. Rather than the “right stuff,” it takes the right funds, or at least the right family and friends, to get to space. But the mass production of this new type of space traveler could have important effects down the line. If affluent people come back from these private flights converted to true believers in space exploration, they may be inspired to open their wallets—or lobby their political representatives—for more than just tourism.

One interesting model is Russian billionaire Yuri Milner. Although he hasn’t been to space, Milner’s massive investments have targeted space science rather than human spaceflight. Beginning in 2015, he formed the Breakthrough Initiatives to support high-risk, high-reward space-science projects. Will some of Branson, Bezos, or Musk’s passengers return inspired to fund astronomy, planetary science, or the search for extraterrestrial intelligence? Perhaps they will found rival space companies, eventually bringing down the cost of a trip to space to the realm of a ticket to Antarctica (which at around $20,000 is still pricey but conceivably affordable to the non-fantastically monied).

Beyond the immediate effects of a growing population of powerful spaceflight evangelists it’s also important to understand that Bezos and Musk in particular have their sights set far beyond suborbital and orbital operations. While attending Princeton, Bezos became enamored of faculty member Gerard K. O’Neill’s now-iconic utopian visions of verdant cylindrical space stations permanently housing humans off-world. Bezos sees New Shepard as just the first step in a slow but steady approach to solving what he sees as Malthusian problems of limited space and resources by shipping millions of people off-Earth. Musk by contrast has always been driven by the planet Mars and a desire to establish a million-person metropolis there as a “back-up” of humanity.

All of this depends on establishing the safety and reliability of these new launch systems. An early disaster reminiscent of Challenger or Columbia would almost certainly scare off otherwise bold ticket-buyers and crater the nascent spaceflight-experience industry, along with those grand visions. But assuming all continues to go well, space will retain its elite status, in the near term even if the type of elitism shifts.

This recent flurry of summer activity is far from more of the same. When NASA retired its space shuttles in 2011 there was only one way for humans to get to space: Russia’s trusty-yet-aging Soyuz rocket and capsule system. Now, 10 years later, the U.S. is home to three privately run routes to space. This fundamental transformation could bend the long arc of space history in ways we cannot yet anticipate.

Printed with permission from Barron's.

About the author: Jordan Bimm is a space historian at the University of Chicago’s Stevanovich Institute on the Formation of Knowledge and a Guggenheim fellow at the Smithsonian National Air and Space Museum.