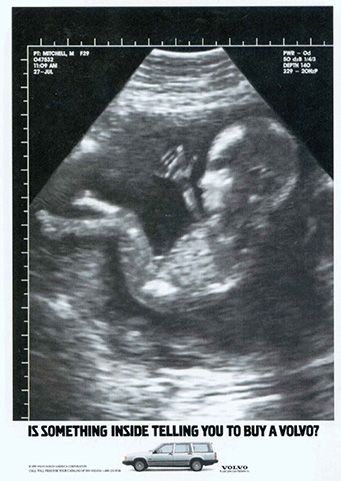 How did the Fetal Ultrasound Become Such an Iconic Image?

About the authors: Dr. Margaret Carlyle, SIFK Postdoctoral Researcher and Instructor, focuses on the production of scientific, medical, and technological knowledge in seventeenth- and eigheenth-century France and its colonies. Learn more about her research here.

Dr. Brian Callender, Assistant Professor of Medicine, is a recipient of the Faculty Research Grant for 2019-21. Dr. Callender is interested in clinical education, global health education, clinical ethics, the patient experience, and the use of graphic narrative in medicine. Learn more about him here.

Ultrasound images of the fetus are immediately recognizable. They’re found in advertising, like this pitch aimed at parents asking: “Is something inside telling you to buy a Volvo?” [right] They fill our social media feed, as posts with tags like “one more to adore.”

Depictions like these of the fetus inside the womb—the fetus in utero—have become iconic. So much so that the fetal ultrasound might be the most familiar medical image today. But this has not always been the case. The fetal ultrasound image was for a long time confined to the doctor’s office, where it was viewed, and only briefly, if at all, by the pregnant woman.

How, then, did the fetal ultrasound become such an iconic image?

To answer this question, we have drawn on the rich resources of the University of Chicago's Special Collections. Using historical sources drawn from the Western tradition, we show that the fetus in utero is an image that has been embedded in our visual culture—and within broader social and political contexts—for over 500 years. It can be found as diagrams in medical textbooks, as medical images in patient records, and as photos in holiday greeting cards. Through these media and across time, the ways that the fetal image has been curated and shared with audiences has changed drastically. It has moved from being a divine mystery to a modern-day social media icon by way of a lengthy process of medicalization.

Towards the end of the Middle Ages, the fetus was seen as mysterious because it was little understood. It was also invisible, being “hidden” inside the uterus. Most theories about human reproduction available around 1450 were based on textual authority that had gone unchallenged for over a millennium. What's more, this ancient authority was not based on human dissection.

During the sixteenth-century Renaissance, the fetus was literally brought out from its mother's mysterious womb and placed on the dissecting table. For the first time in the Western tradition, a new research program dedicated to cadaveric dissection allowed anatomists to study women's unique reproductive capacity. [left]

The shift to human dissection, coupled with the newly invented printing press, brought the fetus back into the textbook tradition. Except this time, the fetus could be found in visual as well as textual form. Here it would remain for centuries to come, for the benefit of trainees in medicine, surgery, and midwifery.

Once the fetus was "discovered" by Renaissance anatomists, it quickly became an object of medical science. This process began when male surgeons took an interest in childbirth and began to challenge the traditional authority of midwives. The triumph of male surgery happened over the course of a hundred years or less. It was sealed by the rise of the modern hospital, where everything from obstetrical forceps to reclining birthing beds were put into use.

From the age of Enlightenment to our present, the fetus has undergone many kinds of medicalization at the hands of physicians and obstetricians. During this time, the fetus has appeared as a geometric puzzle piece and the subject of serialized growth. In this process, the pregnant woman has also assumed new visual identities. She sometimes appears in full, but she is usually faceless and anonymous. More often than not, she appears as mere body fragments: a bony pelvis, a butchered torso [right], or a series of liftable "flaps." These visuals reflect the pregnant subject’s place in the narrative of male-driven medicine: she appears only when her body ‘obstructs’ natural delivery.

The Fetus in Cyber/outer space (1965–present)

In the twentieth century, the fetus has maintained its medical role while achieving a new one within popular culture. The fetus' very public debut in April 1965 came in the form of a photograph on the cover of Life magazine. [left] This free-floating figure might be dubbed a “fetal astronaut," given that it appeared during the Cold War, when the “Space Race” led both the US and Soviet Union to invest heavily in exploring the moon and beyond. The fetal astronaut symbolized broader horizons. It also showed the wonder of the human body and the marvels of modern science.

From here on, the fetal image would be put to use in many cultural arenas: politics, commerce, and entertainment. The fetus of the twenty-first century has made a final journey, from “outer space” to cyberspace. The production of and accessibility to the fetal ultrasound has propelled the fetal image beyond the medical domain and is now a familiar image in the social networks of soon-to-be parents. Fetal imagery has also been co-opted by right-to-lifers in the context of modern abortion debates. In this context, the fetus has been ventriloquized and made to seem life-like in ways that take audiences well beyond the image itself.

The Fetus of the Future

To answer our question: the ultrasound has become the iconic image of the fetus thanks to its 500-year history and its evolving usage within a variety of social and political contexts, from the mysterious medieval world to the world of social media. What does the future of the fetal image hold? The “keepsake” fetal hologram? The 3D animated fetus? Virtual reality visits to the womb for bonding sessions? The in-utero live-stream video? Undoubtedly, the path forward will indulge us with images—including textured, touchable ones—that both excite and challenge how we view, interpret, and employ them.

Readers are invited to visit the “Fetus in Utero” exhibition at the University of Chicago's Special Collections to see these images for themselves, through 12 April 2019.

"Carlyle, Margaret and Brian Callender. 2019. How did the Fetal Ultrasound Become Such an Iconic Image?, March 6, 2019. Formations, The University of Chicago. https://sifk.uchicago.edu/blogs/article/how-did-the-fetal-ultrasound-become-such-an-iconic-image/" 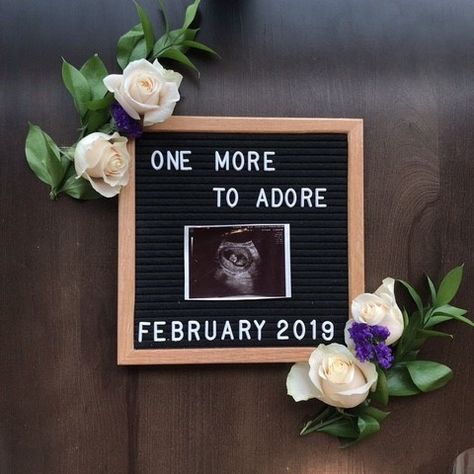 Fetal sonograms are disseminated through social networks via holiday greeting cards, baby-shower invites, and social media posts. On webpages that offer suggestions on ways to announce one’s pregnancy, the fetal sonogram is inescapable. Indeed, fetal images, like this image tagged "One More to Adore," have become part of the social currency of parenthood. 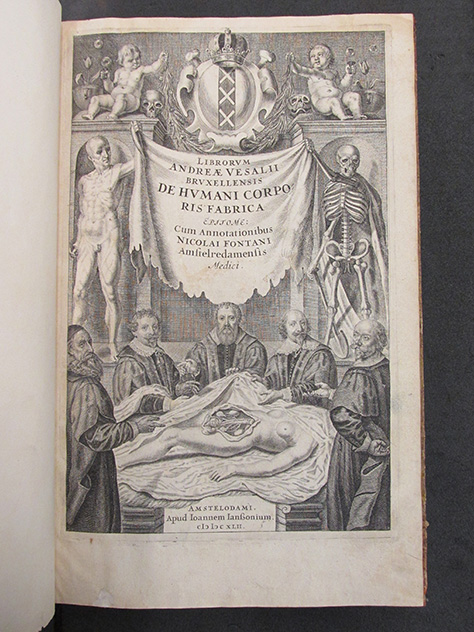 In this allegorical woodcut, dissectors have opened the abdomen of a recumbent woman whose head is shrouded in mystery—a technique adopted to preserve her anonymity amidst controversy about using a female body as opposed to male for scientific study. 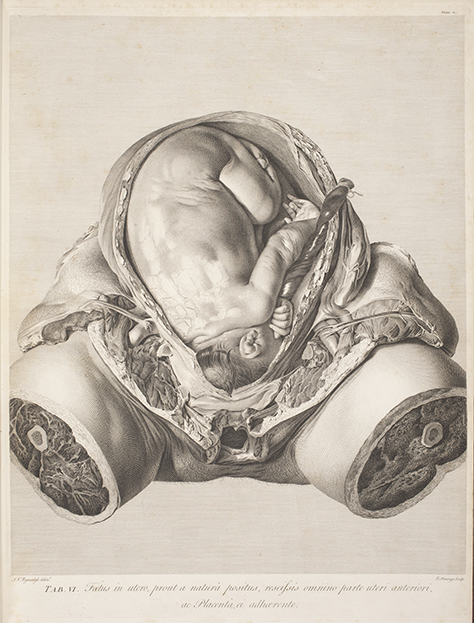 The execution of the hauntingly naturalistic engravings of the Anatomy of the Human Gravid Uterus was an ambitious late-career project that required William Hunter’s collaboration with a team of skilled illustrators and engravers who brought dissections of mothers who had perished during their pregnancies to life in graphic form. In this iconic image, the faceless, dismembered mother—referred to as “butcher shop meat”—is carrying a near-term fetus in utero. 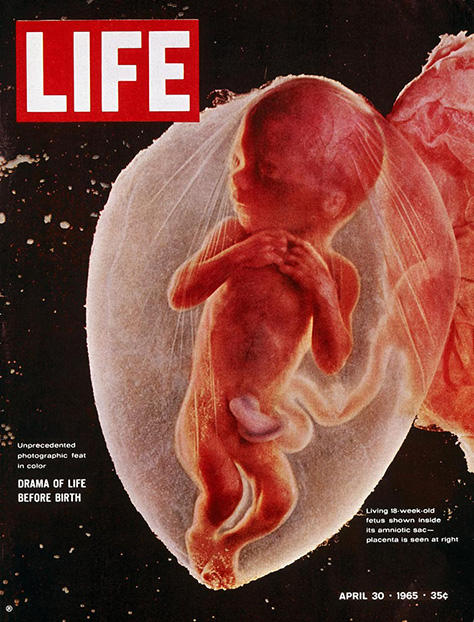 This Life magazine cover photograph depicting a fetus in utero quickly gained iconic status after its publication on 30 April 1965, with eight million copies selling within four days of its release. The fetus is disembodied from its mother and appears to float freely through space and time, as if to anticipate the astronauts who would colonize the moon four years later and secure American superiority over the Soviet Union in the infamous “Space Race” of the Cold War.