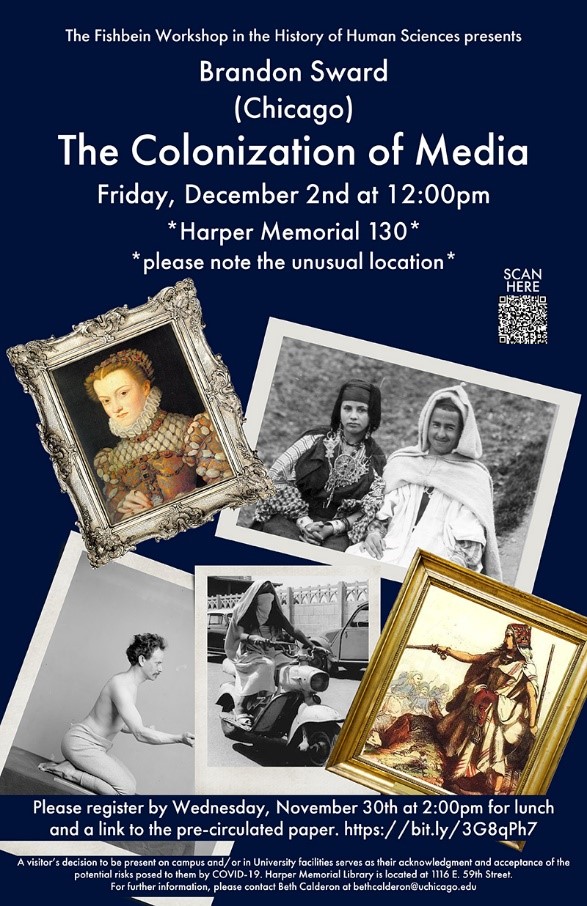 Brandon Sward - The Colonization of Media

The Fishbein Workshop in the History, Philosophy, and Sociology of Science presents:

The Colonization of Media

ABSTRACT:
One of the most successful ethnographies of the past few decades, Mitch Duneier’s Sidewalk, contains a series of photographs by Ovie Carter. Duneier examines the lives of the book vendors in exhaustive detail. Yet, Duneier devotes no space to Carter’s pictures, peppering them throughout like mere illustrations, whose meaning is so obvious it doesn’t need to be analyzed but can be ascertained at a glance. How might we explain this tendency to treat the visual as so radically different from all other species of data? It certainly can’t be the case that social scientists are simply uncomfortable or inexperienced, given that they’ve engaged with images since the inception of the discipline. My dissertation suggests that the answer to these questions have deeper temporal roots than we might assume. More specifically, I consider the impact of colonization on the creation and use of images, specifically as this connection manifests in the work of European social scientists. I focus on Franz Boas, Claude Lévi-Strauss, and Pierre Bourdieu, all of whom made many photographs while conducting fieldwork in Indigenous communities early on in their lives and who also went on to engage with many other visual mediums. I find a predisposition to see images created through lens-based technologies as what I call “self-evident” images, capable of becoming data without attention to their mediated character.

Having established such a link vis-à-vis photography, I then turn to how Lévi-Strauss and Bourdieu discuss painting. Far from viewing this medium as similarly self-evident and hence without need for a specifically mediatic interpretation, they produce at times exhaustively detailed readings of paintings that refuse to reduce that medium to some more fundamental social reality. Rather than attribute these differences to the technology of image making, I offer an alternative that emphasizes their experiences photographing Indigenous peoples. Since at least Durkheim, Indigenous cultures were seen to be simpler than modern societies, a bias which encouraged the idea they could be captured through photography in a way these thinkers wouldn’t believe their own cultures could be.